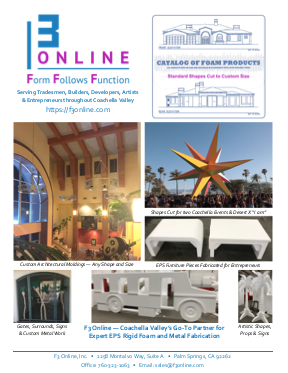 Secretary & Treasurer of the Board 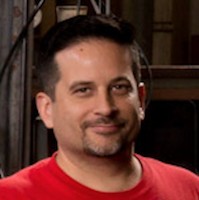 Jerry Andre prides himself as a designer and a maker of things. He traces his passion for drawing, design, and fabrication dating back to his high school years. Jerry’s 25+ years’ experience actively engaged in EPS Foam and Metal Fabrication has enabled him to hone his exceptional skills and knowledge to become a Master Fabricator; creating an amazingly wide variety of foam and metal fabricated products for use cases ranging from the functional to the artistic. His combined skills plus keen focus on assuring customer satisfaction through quality service are instrumental to his receiving the best, tangible accolades any entrepreneur could hope for; customers repeating their business with him and referring their contacts to him.

Jerry, born and raised in Northern California, learned to draw at a young age. In high school and college, he won multiple awards in VICA (Vocational Industrial Clubs of America) for his design and drafting skills. Jerry’s special capabilities led to his introduction and subsequent job offer from a company using EPS (Expanded Polystyrene) rigid foam for decorative trim and facades for residential and commercial buildings.

Jerry has now embarked upon his new adventure to advance his skills as an entrepreneur by partnering with Jim Biggs and Jerry Good to co-found F3 Online, Inc.

Non-Executive Chairman of the Board 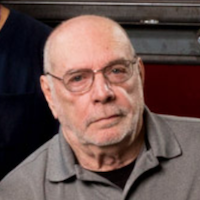 Jerry Good is the consummate entrepreneur. He gets up every morning thinking about process; an inherent trait of his character he cannot escape. Working with machines, designing and building machines purpose-built to satisfy a need has always been a key element in Jerry’s life and career. He first discovered his interest in all things related to machines when he went to work for a commercial laundry business early in his career. During his 18 years there, Jerry designed and built a variety machines, conveyors, racking machines, an automated chemical blending system, and heat exchangers in addition to automating many of the company’s manufacturing processes.

In 1986, Jerry embarked upon his first retirement, moving to Palm Springs, CA to enjoy life and play a few rounds of golf. But his restless nature soon led him to co-founding a company with two partners he met; one holding a PhD in Environmental Engineering and the other a Nuclear Chemist. Jerry’s role was building reclaiming equipment for removing dangerous chemicals from wastewater. While the company’s business was interesting, he just wasn’t having the fun he expected in retirement. So, he sold his interest in the company to his co-founders and became a sole proprietor building spec homes.

Jerry’s home building experience introduced him to EPS (Expanded Polystyrene) rigid foam and its many useful applications for creating a wide variety of moldings, facades, columns, panel insulation, and roofs. He also discovered how difficult it was to source EPS foam locally in the Coachella Valley area even though there was clearly demand in this market. So, in 1990, recognizing another business opportunity, Jerry persuaded local building suppliers and builders to agree to buy their EPS from him if he agreed to build the machine to fabricate EPS into moldings and other shapes. After he built his first EPS hot-wire machine, word-of-mouth soon led to his incorporating Xycorp, Inc in 1996; a business focused on satisfying the growing market demand for EPS hot-wire machines both domestically and internationally. And though manufacturing EPS hot-wire machines quickly became Xycorp’s leading source of revenue, Jerry never abandoned fabricating EPS foam for the local Coachella Valley market.

Now, still retired, but still also serving the insatiable curiosity of his process-oriented mind, Jerry joined Jim Biggs and Jerry Andre to co-found F3 Online, Inc. to lend his wealth of experience in the EPS and Metals fabrication industry as an advisor in the role of Non-Executive Chairman of the Board.